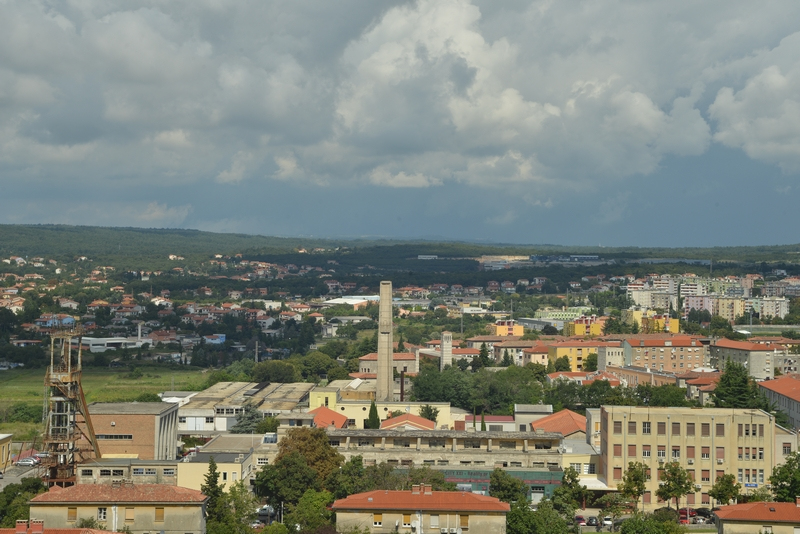 View on the industrial zone Pijacal – an industrial complex in transformation. 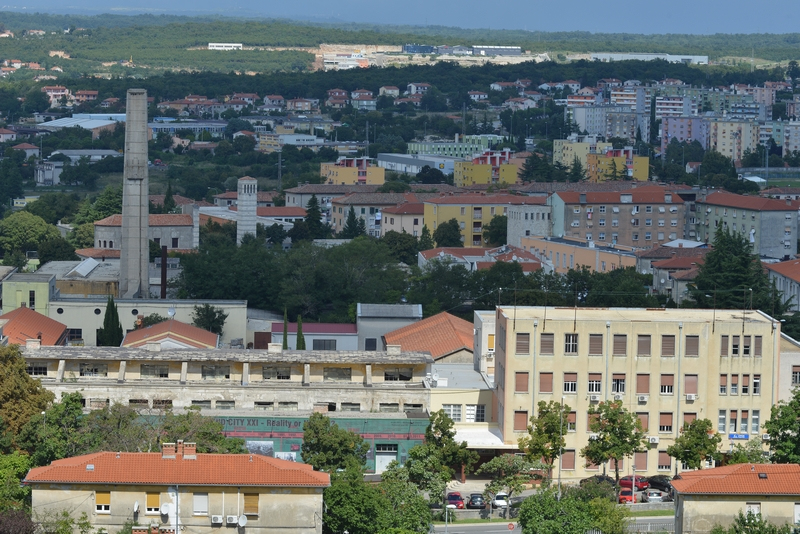 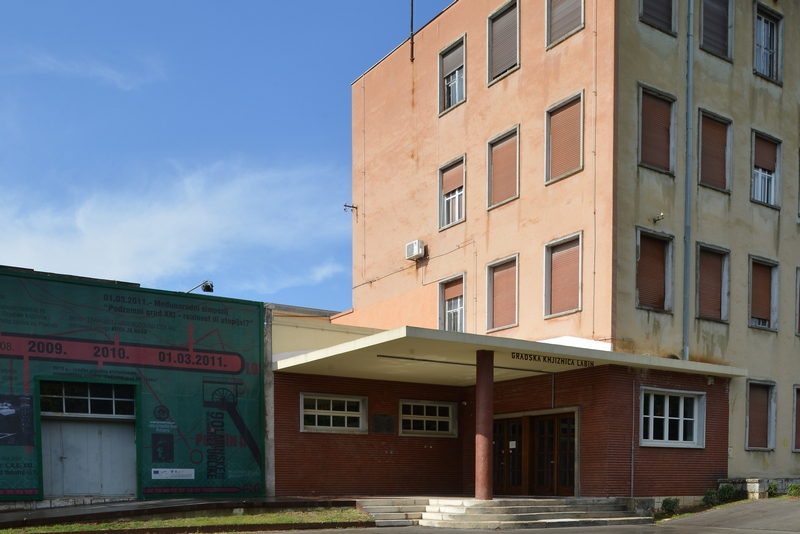 New use of the former administrative building: Labin’s town library 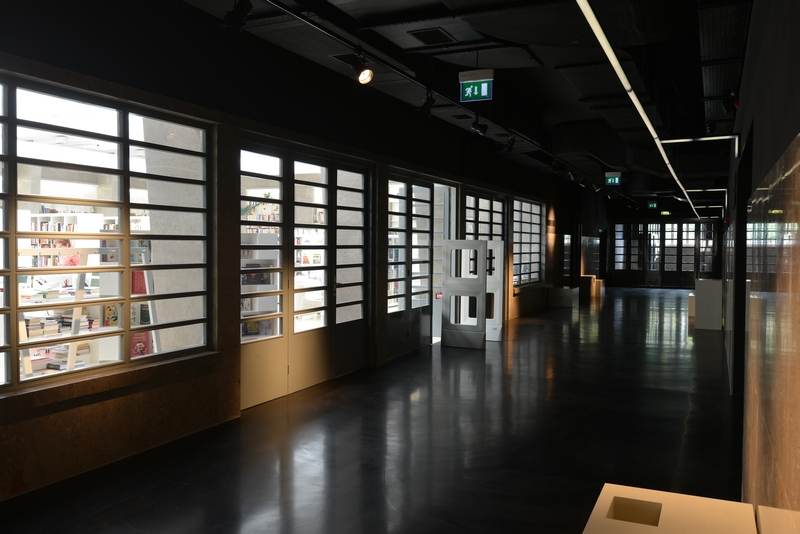 Black hallway of the library, reminding the mining theme 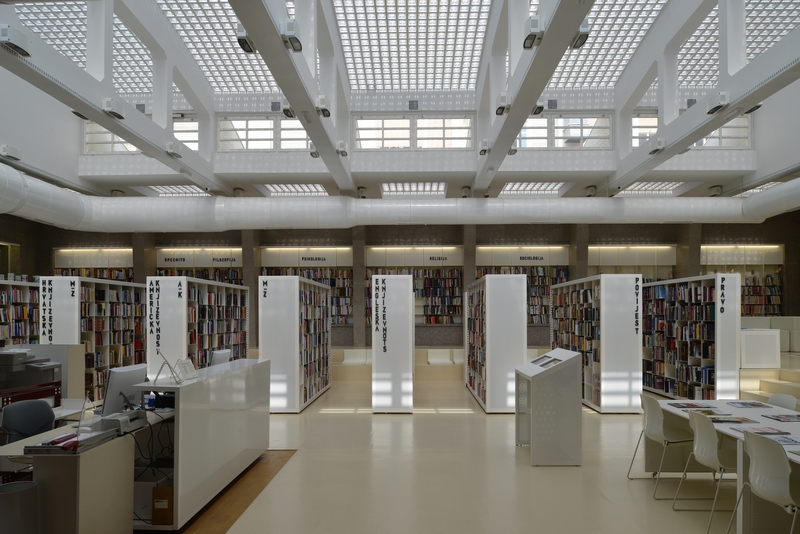 White library: Labin’s mine of culture 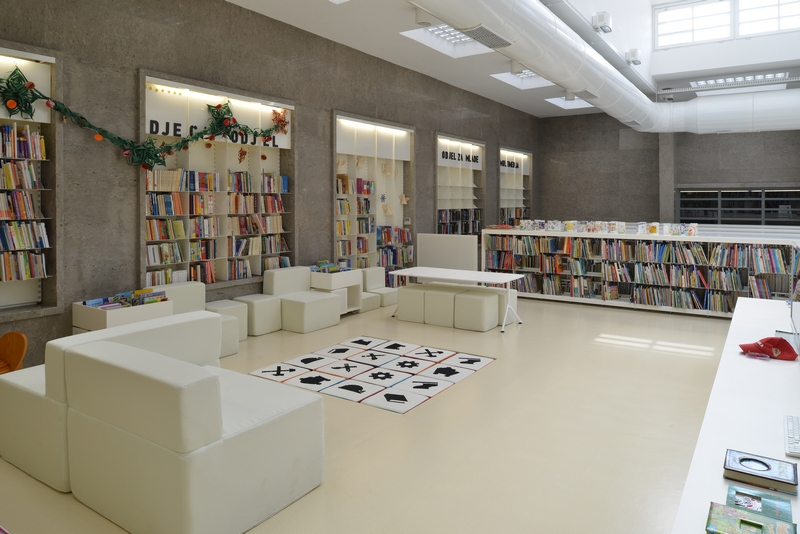 Where the miners once initiated strikes against the oppression by the Fascist regime, a new library has been created. 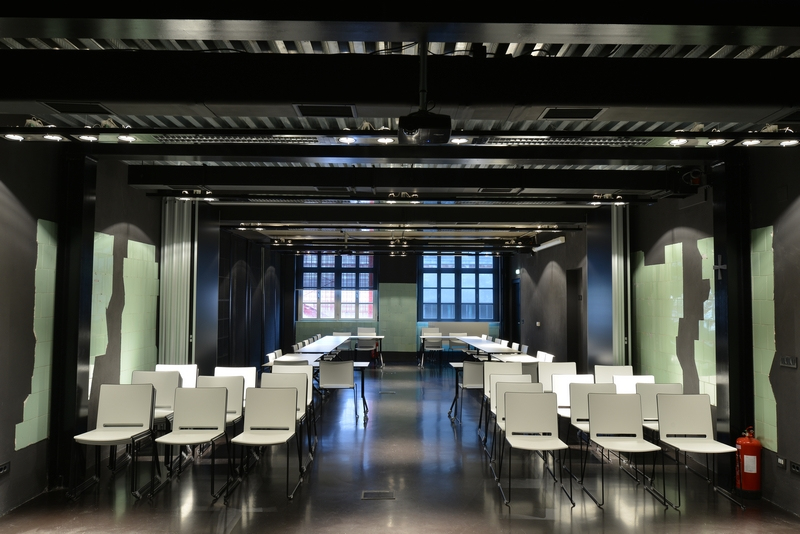 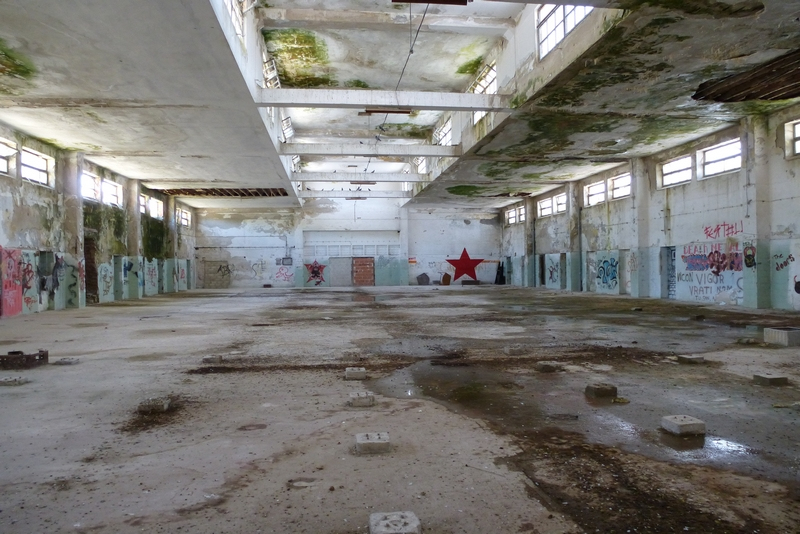 A multifunctional cultural centre is planned for this huge abandoned hall. 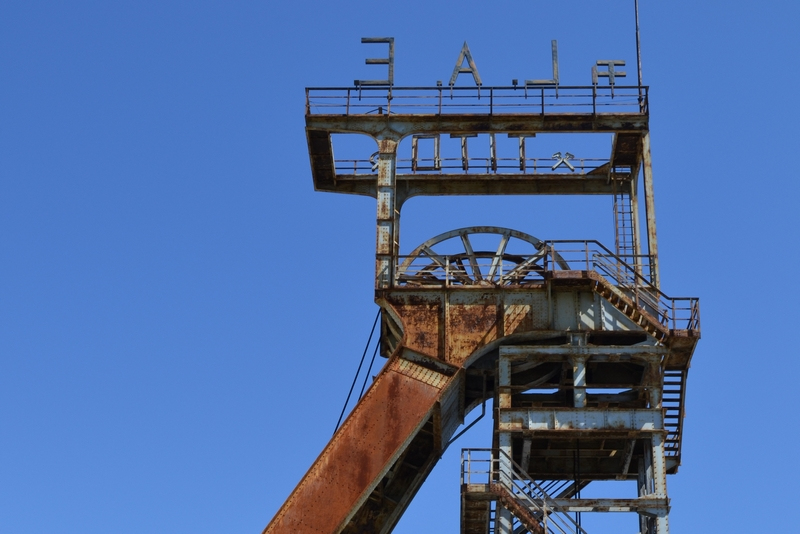 The headgear: symbol of the industrial zone of Pijacal 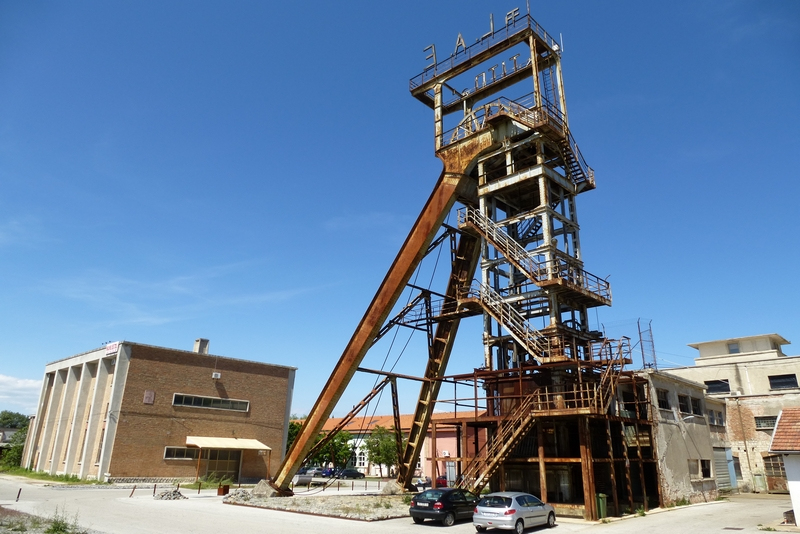 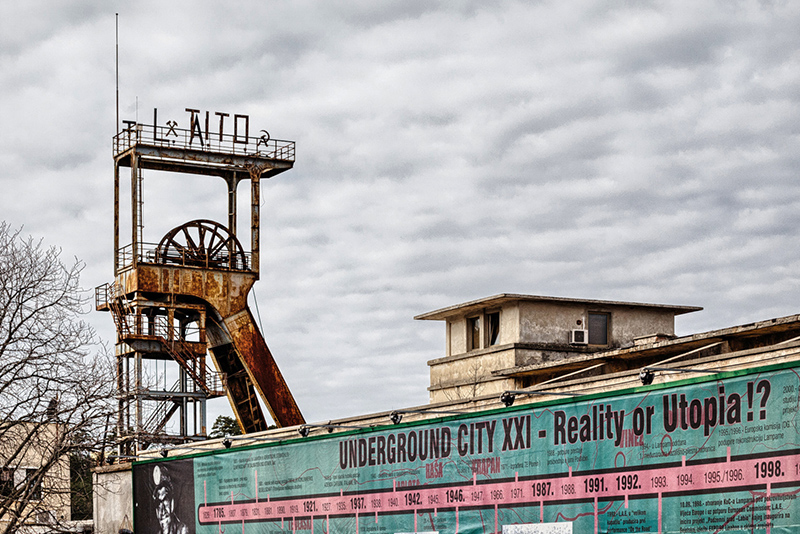 Labin plans a new elevator for the headgear shaft and a mining museum underground. 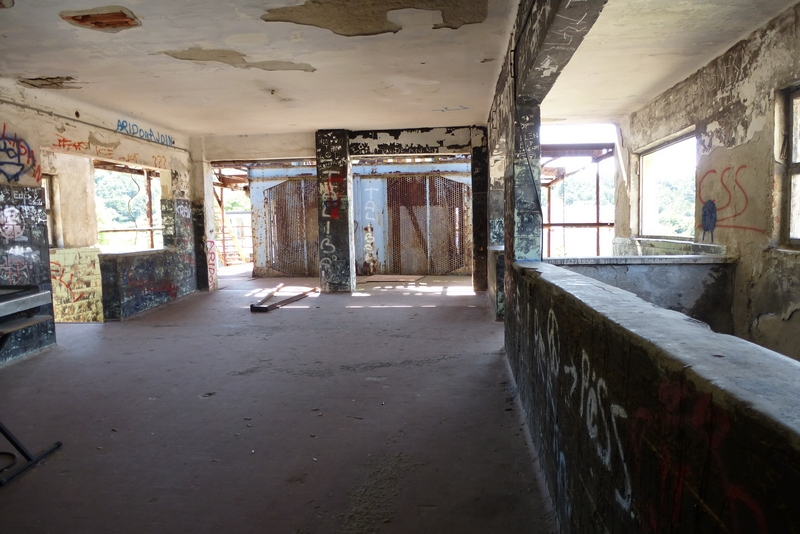 Corridor leading to the elevator. 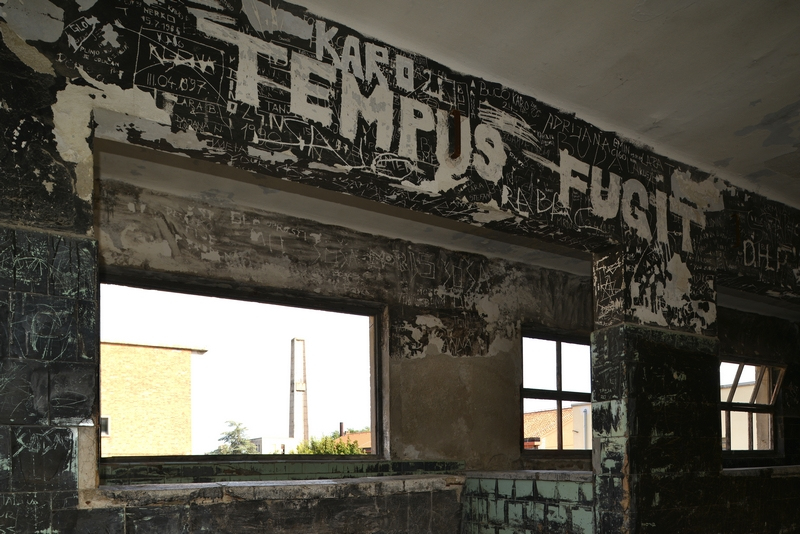 An industrial complex in transformation

New uses – Mine of Culture

The mining complex Pijacal in Podlabin built during the period of Fascist rule in Istria (1938-1942) represented one of the most important coal mine sources on the territory of Italy at the beginning of the 20th century. The former administration building contained various offices for the needs of the mine management, bathroom facilities for the miners and was connected to the lamp house, from which it was possible to access the shaft headgear (šoht). After the closure of the shaft in 1988, a long period of gradual abandonment followed. More recently, the mining complex has been adapted to new uses and part of it is being transformed into a multifunctional cultural center: the town library within the so-called marble hall and a multimedia centre inside the facilities of the former bathrooms.

A team of young architects was very successful at adapting the space to its new needs with a maximum respect of its values and implementing functional and aesthetic criteria. In a spacious hall covered with grey marble, where the miners once initiated strikes against the oppression induced by the Fascist regime, a new library has been created. The library is predominantly white, and a large amount of light passes through the many glass blocks of the ceiling. In other parts, the emphasis is on complete blackness. The powerful black and white contrast clearly alludes to the mining activities.

Restoration of the Shaft Headgear

The tall steel tower is 32.5 metres high, and the shaft is 570 metres deep. The headgear elevator started to operate in 1938, transporting miners (16 in each cage at three levels), full or empty coal wagons and other equipment. Today, the tower is largely covered with rust. Ongoing projects involve the restoration of the steel tower and the implementation of a new elevator for visitors in order to access the former mine tunnels. A circular tunnel itinerary connecting Podlabin, Raša and Rabac will offer the history of the miners’ working and living conditions, as well as their mental and physical strength. Moreover, a museum about mining activities is planned in the former lamp house, in memory of the innumerable miners that lost their lives.